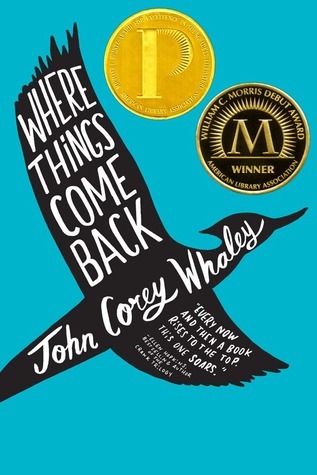 Does John Corey Whaley know how to write!

Winner of the 2012 Michael L. Printz and William C. Morris Awards, this poignant and hilarious story of loss and redemption “explores the process of grief, second chances, and even the meaning of life.” Kirkus Reviews

In the remarkable, bizarre, and heart-wrenching summer before Cullen Witter’s senior year of high school, everything he thinks he understands about his small and painfully dull Arkansas town vanishes. His cousin overdoses; his town becomes absurdly obsessed with the alleged reappearance of an extinct woodpecker; and, most troubling of all, his sensitive, gifted fifteen-year-old brother, Gabriel, suddenly and inexplicably disappears.

As Cullen navigates a summer of finding and losing love, holding his fragile family together, and muddling his way into adulthood, a young, disillusioned missionary in Africa searches for meaning wherever he can find it. And when those two stories collide, a surprising and harrowing climax emerges that is tinged with melancholy and regret, comedy and absurdity, and above all, hope.

This book is such a treat to read, primarily because of Whaley’s masterful plot construction. The plot is split – one story follows Cullen Witter as he navigates the summer between his junior and senior year of high school, following his cousin’s fatal overdose and his younger brother’s disappearance. The second story first follows a young missionary in Africa, whose eventual return to the States triggers a series of events that’s larger than his own story. At first, the two plotlines seem completely unrelated, but when Whaley does end up bringing them together… ooooohh boy. I didn’t predict it at all. Nothing surprises me, but the conclusion of Where Things Come Backmade my jaw drop in the best way.

Even so, I’m torn between giving this book three and four stars. In addition to the plot construction, I think the strongest aspect of this book is the small-town setting. Cullen’s story is set in rural Arkansas, but it really could be any small American town. The poverty and the hopelessness will be familiar to anyone who has lived in a small town. Cullen’s resignation that he, like his parents, will be stuck in his hometown forever rang true.

But I felt like Whaley’s characters were weak. Cullen reminded me too much of John Green’s typical hero – awkward, melancholy, sensitive, and very irritating. Cullen has an annoying habit of breaking into third person, i.e., “when one is doing X, he will think Y…” that is absolutely infuriating, especially when the technique is used in every chapter. Cullen also imagines those around him as zombies, which I presume is a coping mechanism after going through the trauma of a family member’s death and another’s disappearance. I guess I don’t mind this, but it was annoying to read so many zombie passages, especially since they weren’t exactly framed as separate occurrences from Cullen’s real life. Maybe Whaley was going for some magical realism?

The other characters – especially the girls – are beginning to bleed together in my memory. Not only does everyone have a similar name, but their voices are similar as well.

I did enjoy this book’s quirks – The Book of Enoch, a holy book not included in the Christian Bible, is a prominent feature. I loved that. I also enjoyed the mythology of the Lazarus woodpecker. These topics lurk in the background of the book’s plot, and it’s just delightful. They’re unique, and I really appreciate Whaley’s decision to introduce them.

Overall, I am impressed with this book as a debut novel. Whaley knows how to construct a plot! But his characters could use some work. I didn’t feel emotionally connected to any of his characters, but I have no doubt that his characterization will improve as he continues to write. I will definitely be reading more of his novels in the future!